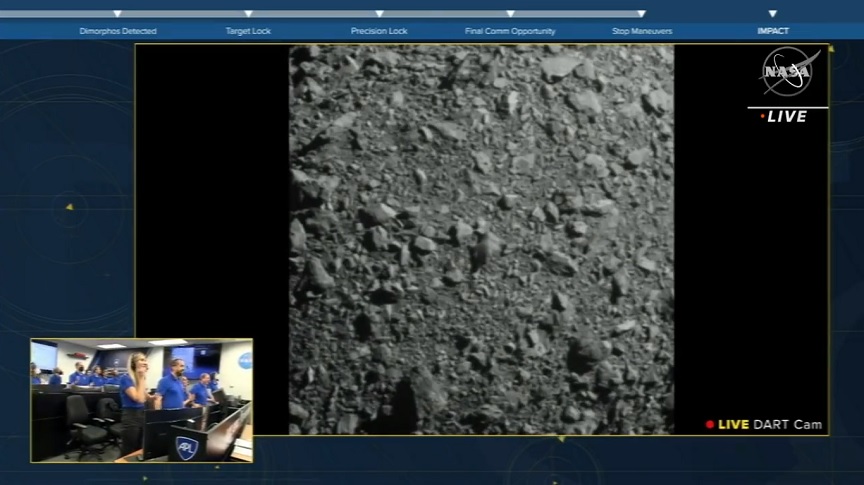 An unmanned spacecraft of hers NASA inoculate one asteroids moving at high speed in the early hours of Tuesday (9/27) in a… rehearsal in case anyone asteroid posed a threat to Earth.

The collision occurred seven million miles from our planet with the spacecraft named DART (s.s. arrow, but also the initials of the Double Asteroid Redirection Test program) ramming the rock at a speed of 14,000 miles per hour. Scientists calculated that the collision would create a crater on the asteroid “Dimorphos” and change its orbit.

The kamikaze craft, slightly smaller than a car, crashed into the asteroid at the predicted time (at 02:14 Greek time). NASA teams at the mission control center in Maryland erupted in cheers at the time of impact.

“We have an impact,” mission manager Elena Adams announced from the control room, jumping and waving her arms, as seen in a video released by NASA.

Telescopes around the world, but also in space, were watching the sky in order to “capture” the moment of the collision. Of course, even though the collision was immediately noticeable – DART’s radio signal suddenly stopped transmitting – it will be days or even weeks before it is determined whether the asteroid’s orbit changed.

The $325 million mission was the first attempt to change the position or orbit of an asteroid or any other physical object in space.

“We are entering a new era for humanity”said Laurie Glaze, director of NASA’s planetary science division.

Earlier, before the completion of the effort, the director of the space agency, argued: “No, this is not a movie script. We’ve all seen movies like Armageddon, but here in real life the stakes are very high.”he emphasized in his message.

Scientists decided that “Dimorphos” was the right asteroid to… attack. It has a diameter of 160 meters and poses no danger to planet Earth. It is a satellite of a larger asteroid, Gemini, and has so far made a complete revolution around it in 11 hours and 55 minutes. NASA wants to reduce the orbit by 10 minutes, in other words bring it closer to Gemini. So he met all the conditions that the experts put forward to carry out this scenario of how to save the Earth in case it was under threat.

The craft traveled for about ten months after launching from California. To hit a target as small as Dimorphus, the last phase of its flight was completely automated, as if it were a self-guided missile.

Three minutes after impact, a small, shoebox-sized satellite called LICIACube, launched by the spacecraft before impact, was to pass within 55 kilometers of the asteroid to collect images.

The mission was also to be monitored by the Hubble and James Webb space telescopes, which were to locate the dust cloud so that the amount of ejected matter could be calculated.

It will also allow a better understanding of the composition of Dimorph, which is representative of frequently occurring asteroids, thus assessing the effectiveness of the method.

The European Hera spacecraft, due to launch in 2024, will take a closer look at Dimorphos in 2026 to assess the effects of the impact and measure, for the first time, the asteroid’s mass.

Asteroids have held surprises for scientists in the past. In 2020, the US Osiris-Rex probe penetrated deeper than expected into the surface of the asteroid Bennu. The exact composition of Dimorphos is not known so far.

“If the asteroid reacts to the DART impact in a completely unpredictable way, this may lead us to reconsider whether kinetic impact is a technique that can have general application.”pointed out Tom Statler, scientific chief of the mission.

“Dinosaurs didn’t have a space program to know what was coming, but we do”NASA climate advisor Kathryn Calvin pointed out, with scientists saying that this was just the beginning and that they should continue to discover and track asteroids in order to protect Earth.

Cosmic neutrinos detected from nearby galaxy 47 million light-years away

Samsung again trolls Apple, offering iPhone owners to “get off the fence”

“We will liberate Iran”, says Biden – The country is shaken by anti-government protests