Nikos Anastasiadis: Famagusta belonged and will belong to its rightful owners and residents 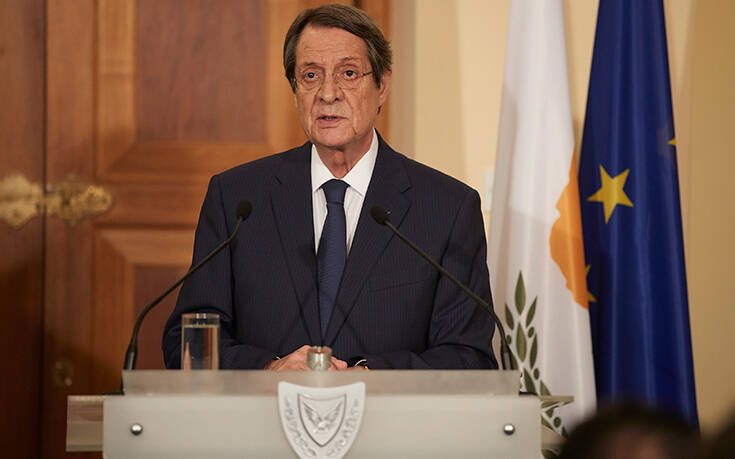 If the real concern, he claims, of the Turkish President or the Turkish Cypriot leadership was to return the property to its rightful owners, the Famagusta, should implement Resolutions 550 and 789, by handing over the city to the United Nations, which would thus allow the beneficiaries to return to their properties under security conditions, the President of the Republic of Cyprus said on Tuesday night Nikos Anastasiadis.

In his speech during an event at the Presidential Palace, on anniversary of the Turkish invasion, Mr. Anastasiadis stressed that “the Today’s announcements of the Turkish President is just a practical step, for the umpteenth time, violation of United Nations Resolutions.

An attempt he wants to toolkit human suffering and cause – so he hopes – a division among Greek Cypriots, something I have no doubt will not achieve, because I am sure that no Varosian would want to be an accomplice in Turkey’s plans and goals.

Famagusta belonged and will belong to its rightful owners and inhabitants. That is why I want to send the strongest message to Mr. Erdogan and his representatives here: Turkey’s unacceptable actions and demands will not be accepted».

Mr. Anastasiadis pointed out, according to the APE BPE, that the Republic of Cyprus has already taken specific actions through telephone and written information from the Minister of Foreign Affairs about the Turkish announcements to the EU High Representative for Foreign Affairs and Security Policy, with personal information to the ambassadors of the Permanent Members of the Security Council and to the ambassadors of the 26 Member States of the European Union.

At the same time, “the foreign minister had both telephone contact with him French Foreign Minister, τον Russian Foreign Minister and important others – there will be an announcement on this – while at the same time, I have convened a meeting of the National Council for tomorrow at 11 am, to inform and take decisions on the appropriate measures to be taken “.

“I do not want to expand on the other unsubstantiated allegations of the Turkish President. I would not like to comment on ideas that do not lead to a viable and functional settlement or solution to the Cyprus problem, in accordance with international law and the status of the Republic of Cyprus as an EU member state.
What I want to repeat is that our pursuit remains finding a solution that will lead to a functioning and sustainable state, a European state that will fully respect the human and political rights of all citizens, Greek Cypriots and Turkish Cypriots.

That is why I call on our Turkish Cypriot compatriots to realize that it is not only the fate of the Greek Cypriots that is threatened, or the rights of the Greek Cypriots that are threatened, but also their own future “, said the Cypriot President to emphasize that:” What I do not I continue to ignore the continuing violation of international law, UN Resolutions, Security Council Resolutions, the numerous conclusions of the European Union, but also of all Condemned and condemn the military invasion of Turkey and the continued occupation of 37% of the territory of the Republic of Cyprus.

What I cannot ignore is the effort to complete Turkey’s long-term goals, through the growing intimidation and intolerance that both we and the international community are witnessing on a daily basis.

Since 47 years and despite the continuous efforts of the Greek Cypriot side, through historical compromises and painful concessions, instead of a positive response, the only thing that is recorded is the projection of new unacceptable claims by Turkey, invoking the law as it interprets it.

After the shipwreck in Crans Montana, a failure that was the result of Turkey’s obsession with unacceptable demands, including the continuation of the anachronistic system of guarantees and the permanent presence of occupying troops, began to project the narrative that it is impossible to find a solution based on UN resolutions .

A narrative that with me heaps of false allegations led to the revelation of Turkey’s ultimate goals, with the claim that the new, feasible basis for a solution is the recognition of two independent states. A claim, which was also submitted in writing at the informal five-party meeting in Geneva. A claim made by the Turkish President during his presence here.

A presence that through his speeches revealed the real and timeless intentions of Turkey. I will be more specific. During his speech in the illegal Parliament, he stated, among other things: “The case of Cyprus is big. This story is the culmination of a historically, consciously and militarily great Nation, which was written with the heroic epic of 1974“. “Consciously”. And he considers it historic.

I do not need to make any other comments on the reasons that led to the invasion in 1974 and their continued occupation of one third of the territory of the Republic of Cyprus.

What I want to comment on is what he said about the Greek Cypriot side’s refusal to share power or the country’s natural wealth.

As for the division of power, let me just remind you that through the convergences achieved during the negotiations, the composition and operation of the Legislature, the Judiciary, but also the composition of the Council of Ministers of the Federal Government had been fully agreed.

Suffice it to point out what the UN Secretary – General is recording in exhibition of 28 September 2017, following the Crans Montana Conference, where in paragraph 27 he had literally recorded: ” […] until the end “and not the departure of Anastasiadis” of the Conference, the parties had essentially solved the basic issue of effective participation “.

In addition, let me remind you that agreement agreement has also been reached on the management and sharing of hydrocarbons since 2010, an agreement that was repeated in 2015. Stronger proof of this is the fact that the issue of hydrocarbons was not one of the 6 points of the framework presented by the Secretary General in Crans Montana.

Mr Erdogan also said that[ ] does not look at the lands, or the rights of anyone ”. The Turkish invasion itself and the occupation of 37% of the territory of Cyprus, at a time when the ownership of Turkish Cypriot land did not exceed 14%, is not usurpation and infringement of the individual right to property?

Which country has been repeatedly condemned by a number of United Nations Resolutions, Security Council Resolutions, and the European Court of Human Rights for unlawful invasion and illegal occupation and its consequences?

“To what extent will Mr. Erdogan consider that the EU or the United States will turn against him when all the states condemn him, when the international community condemns him?”

And he concluded: “Our homeland experienced foreign occupation many times and for a long time. If anything kept Hellenism alive, if it kept our patriotism high and kept our identity, language, religion and traditions unchanged over the centuries, it was the unity and solidarity we showed as a people.

It is the same unity and solidarity of all the people and the political forces that is dictated by the painful reality of our homeland occupied for 47 years and the need through this unity to work to fight for the liberation from the occupation and to face the new challenges. and threats the country receives.

After all, this is the obligation to those who gave their lives to keep our homeland alive, to keep the Republic of Cyprus alive, to keep the state free so that it can negotiate, to hold struggles, in order to be able to liberate our homeland, to reunite it, with the sole aim of: peaceful coexistence. With the sole aim: To hand over a homeland with complete sovereignty, complete independence and complete territorial integrity. A homeland model of peaceful coexistence and co-creation among its legal inhabitants, regardless of nationality and religious beliefs, and a pillar of stability and security in the wider region.

This was the vision of those who gave their lives, this is the expectation of the entire Cypriot people.

To pay off this debt we will continue to work and struggle, consuming the last straw of our forces, in order to achieve it.

I want us to be held high, I want us to keep the spirit of resistance and denial of injustice alive. And we will keep it. Because the law is on our side.

What I want to assure you is that we have the determination, we have the will, we know what we are seeking and we know what we want. We want an independent, sovereign, EU member state that respects everyone without exception, but in particular, will not depend on anyone. Anachronistic guarantees, the presence of foreign troops was, unfortunately, the source of the suffering that our country is suffering. Be strong. Good freedom».