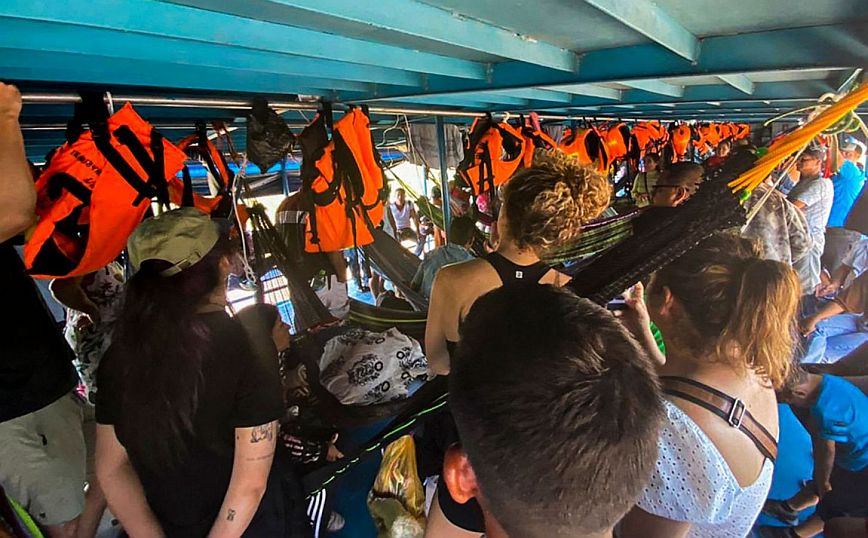 In the release of more than 100 tourists who were being held hostage, natives proceeded in the area of Peru (s.s. extends the Amazon rainforest), after a series of negotiations.

The touristswho were traveling by boat on a river, were abducted on Thursday by members of the Kuniniko community, who wanted to pressure the authorities to intervene after the September 16 spill of 2,500 tons of crude oil into the river.

Among the kidnapped tourists were women and children. The 27 are nationals of the US, Spain, France, Britain and Switzerland. The remaining 80 are Peruvian.

The human rights ombudsman’s office explained that the negotiations resulted in the kidnappers “accepting our request to release” the tourists.

“They released us all”Angela Ramirez, a Peruvian cyclist who was among the indigenous hostages, told AFP shortly afterwards.

He added that it was obvious how tourists felt “a lot of stress, a lot of fatigue”as they were unaware of what their fate would be during the 28 hours that their suffering lasted and they gradually began to get thirsty and hungry.

“They are already returning to their countries,” Tourism Minister Roberto Sanchez told reporters in Lima.

Leader of the community of indigenous people stressed that the kidnapping was decided to be done in order to the government to send a delegation to ascertain the damage to the environment caused by the oil spill.

He added that the tourists were kept on board overnightpending a solution.

The incident unfolded in a section of Maranion, a river that passes through the area of ​​the Kouniniko community.

Indigenous groups have also been blocking the passage of ships of all types from the river since Thursday, in protest at the crude oil leak caused by a hole in the Norperuano Pipeline (ONP) in Loreto province.

On September 27, the government declared a state of emergency for 90 days in the affected area, in the lands of the communities of Kuniniko and Urarina, where some 2,500 indigenous people live.

The Norperuano pipeline is owned by the state-owned oil company, Petroperú. It is among the largest public works in the Andean state. Built four decades ago to transport oil from the Amazon rainforest region to Piura, near the coast, it is about 800 kilometers long.

The company attributed the spill to an attack, during which a “21cm hole in the oil pipeline” was deliberately drilled.

Petroperú says there have been ten attacks on its Loreto pipeline since January that caused oil spills.

- Advertisement -
Share
Facebook
Twitter
Pinterest
WhatsApp
Previous article
Blinken – Abbas phone call in the wake of Netanyahu’s election victory
Next article
Haiti: Sanctions from the US and Canada on the former and current president of the Senate