Tension remains in Brazil: Bolsonaro calls on protesters to open the streets

The situation in Brazil remains unsettled after the defeat of Jáich Bolsonaro in the elections and the rise to power of Luis Inacio Lula da Silva. Bolsonaro called on his supporters to lift the latest road blockades, but called the protests “legitimate”.

“I appeal to you: open the roads. This seems to me to be part of legitimate protests,” Bolsonaro said in a video posted on Twitter on Wednesday, referring to roadblocks that have been set up on roads in more than half of Brazil’s states, although they are dwindling in number. “Other demonstrations taking place throughout Brazil, in other places, are part of the democratic game, they are welcome,” the far-right outgoing president added. 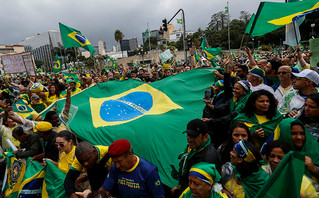 In Sao Paulo, thousands of Bolsonaro supporters demonstrated yesterday morning outside the military command of Southeast Brazil, demanding that the military intervene “immediately”, an AFP journalist reported. A similar demonstration was held outside the Army General Staff in Brasilia. In Rio de Janeiro, the gathered demanded the intervention of the army, shouting the slogan: “Lula, thief, your place is in prison.”

“We are asking (…) for the intervention of the army so that our country does not become communist,” explained 41-year-old salesman Rodrigo da Mata from Sao Paulo. “We don’t recognize the result of the election because we know it was rigged, like everything the PT does,” he added, referring to Lula’s Workers’ Party.

The number of roadblocks decreased yesterday: the federal road police (PRF) recorded about 100 in 12 states, according to the tally it announced in the evening. A total of around 776 such demonstrations have been disbanded so far.

Their numbers dropped drastically once the police started using force with the approval of the Supreme Court, which asked her to use “all necessary measures” to lift road blockades.

In Sao Paulo the forces of order were forced to use tear gas and water cannons to restore traffic on the main road of Castelo Branco, Brazil’s economic lung in the central-western part of the country.

The roadblocks caused supply problems in the country, which relies exclusively on road transport to transport products and food. The National Confederation of Manufacturers already warned on Tuesday about the “risk of fuel shortages”, if the roadblocks are not removed immediately. News site G1, for its part, estimated that 70% of supermarkets are already experiencing problems in restocking some products.

- Advertisement -
Share
Facebook
Twitter
Pinterest
WhatsApp
Previous article
Others did not think of it, and Huawei released a watch with a removable screen. Useful Solution
Next article
Rubic Bridge Lost $1.2M Due to Compromised Admin Key