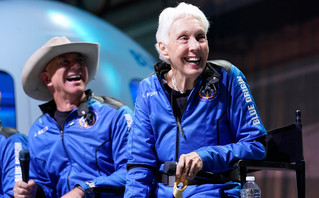 The 82-year-old Wally Funk was one of his two passengers Jeff Bezos traveled into space on Tuesday, July 20 on a flight that lasted almost 11 minutes, however she did not just have to say well about her experience.

Speaking to Fox, Wally Funk gave a less enthusiastic description of the trip, which she said was not so… space.

“We went straight up and I saw darkness. I thought I would see the world, but we were not high enough. ” said the 82-year-old.

He also noted that the trip lasted a while. “I liked every moment of it, but I wish it lasted longer,” Funk said.

It is noted that the “New Shepard” rocket-capsule with passengers the richest man on Earth, Jeff Bezos, his brother, Mark Bezos, as well as Wally Funk by Oliver Damen, the oldest and youngest, respectively, man who traveled in space reached an altitude of 100 km, beyond the Carman line, the internationally recognized boundary between the Earth’s atmosphere and space and after 10 minutes or so returned to Earth and landed with absolute success.

The launch took place at 4:12 p.m. Greek time from western Texas and the flight lasted 10 minutes and 18 seconds.

Pegasus case: Macron changed phone after revelations about the scandal

Coronavirus – Spain: Traffic ban extended in Barcelona and other parts of Catalonia