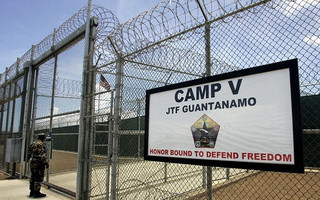 Her first inmate from the US military prison in his Gulf Guantναnamo conveyed today Monday (19/7) the government of the president Joe Biden.

This is a Moroccan who has been imprisoned since 2002, with the result that the prison population has been reduced to 39 detainees, APE-MPE reports.

The prison, set up to house foreign suspects following the September 11, 2001 attacks in New York and Washington, has come to symbolize US exaggerations in the “war on terror” because of its harsh investigative methods, which critics say amount to torture.

While former Republican President Donald Trump kept prison open during his four-year stay in the White House, Biden’s Democrat has promised to close it.

Abdul Latif Nasir, a 56-year-old Moroccan, was repatriated to Morocco. The recommendation for his release was made in 2016.

“The government (Biden) is committed to pursuing a conscious and thorough process focused on responsibly reducing the population of Guantanamo detainees while ensuring the security of the United States and its allies,” he said in a statement. Ned Price Department.

The Attorney General of Morocco stated in a statement that Nasser will be investigated for alleged involvement in terrorist acts and a police source said he was being held in Casablanca.

At least 12 Moroccans were detained at Guantanamo Bay those who have been repatriated are the subject of investigations and trials. One of them, Ibrahim Bencekroun, was imprisoned for six years after his repatriation in 2005 and died in 2014 in Syria, where he traveled to join a militant group.

Most of the detainees who have remained at Guantναnamo have been held for almost two decades without charge or trial.

The prison population, opened under President George W. Bush, reached about 800 inmates before it began to shrink. Former Democratic President Barack Obama further reduced the number, but his attempt to close the jail was largely thwarted by the Republican opposition in Congress.

Legislation continues to prevent the federal government from transferring inmates to prisons in the United States. Even with the Democratic Party now controlling Congress, Biden has such a slim majority that he would face a tough test if he sought legislative changes, and some Democrats may also oppose them.

US Secretary of State Anthony Blinken said last month that the government was “actively considering” re-establishing the post of State Department envoy for the closure of the Guantanamo Bay naval base prison.

Helicopters will appear in Microsoft Flight Simulator, but they will have to wait

Apple has released an update for iPhone and iPad