In an official ceremony, which will be held today at 15:00 (Greece time) in the Kremlin, Vladimir Putin will formalize the annexation of Donetsk, Luhansk, Kherson and Zaporizhia into the Russian Federation. Earlier this month, the four regions held referendums, which Kyiv and its Western allies consider illegal, to join Russia.

The Russian president recognized the Ukrainian regions of Zaporizhia and Kherson as independent statesaccording to presidential decrees made public by his services late last night Thursday (9/29), a necessary intermediate step on the eve of formalizing their annexation to the Russian Federation.

“I order the recognition of the state sovereignty and independence” of these two regions of southern Ukraine, read the two decrees signed by Mr Putin, who is preparing to finalize their annexation to his country later today, as well as that of the Donetsk regions and Luhansk (east). 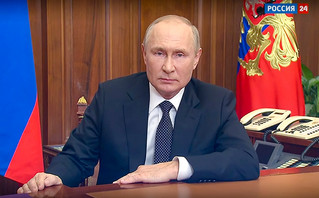 The text, prepared by the US and Albania, has not yet been made public. However, it has no chance of being approved, given that Russia has veto power. Washington has announced it will then put it to a vote at the UN General Assembly, where no country has a veto.

The annexation of four Ukrainian regions to the Russian Federation is condemned by Kyiv and its Western supporters. Mr. Putin and other Russian officials have testified that once these regions are annexed, the Russian armed forces will defend them even using nuclear weapons if necessary.

Ukrainian President Volodymyr Zelensky, for his part, has called a meeting of his government’s National Security Council for today. Kyiv does not appear to have the slightest intention of giving up its weapons, instead asking its Western allies for more to continue its counterattack against Russian troops.