Documents on the Cyprus issue: Tsavousoglou’s big ‘no’ to the Crans Montana talks

“The Alliance Treaty could be structured as a new treaty, but it should include provision for the permanent presence of Turkish troops. Zero troops were a red line for Turkey.”

The above phrase is included in the official minutes of the United Nations of the meeting of the UN Secretary General, Antonio Guterres, with the Minister of Foreign Affairs of Turkey, Mevlüt Çavuşo .lu, as revealed by the “Liberal” of Cyprus.

The meeting of the two men took place on July 6, 2017, at 1 p.m. (local time) in the resort of Crans Montana, Switzerland. In other words, the meeting took place before the famous dinner, which was blown up by the occupying power, which, however, was able – with the help of the UN people themselves and famous Greek Cypriots – to place the blame for the collapse of the talks on Nicosia.

In official minutes, signed by Matthias Schuster, also notes that:

“Mr. Tsavousoglou stated that for Turkey the view of zero troops, zero guarantees was not a starting point (was a non-starter).”

The Turkish minister was answering Mr Guterres’ main question, which according to the minutes was as follows:

What are Turkey’s red lines given the talks of the past few days? He asked this question to Mr. Tsavousoglou as soon as the meeting started.

Mr. Guterres received from the Turkish minister an informal document with the exact Turkish positions. He even asked him to keep it confidential and obviously not to share it with President Nikos Anastasiadis and Greek Foreign Minister Nikos Kotzias, most likely not even with the representative of the European Commission.

So, many hours before dinner, the Secretary-General was aware of Ankara’s precise positions on security and guarantees. The positions were negative. On the issue of troops, Turkey’s views would be made known at a second meeting, on the same day, which took place at 6 pm. (We will present a relevant document in our new text).

Before leaving the first meeting, Mr. Guterres sought to receive a “positive” response from Mr. Tsavousoglou, for the unilateral right of intervention, so that he could go to dinner with a strong position of Turkey.

The minutes shall state the following:

The Secretary-General asked whether this meant that Turkey could accept the immediate replacement of the Guarantee Treaty with the Implementing Treaty and abolish the unilateral right of intervention.

Mr Guterres reportedly sought the immediate abolition of Turkey’s guarantees and invasions, and sought to exploit the informal informational document given to him by the Turks, which included their red lines.

However, instead of confirmation, he received a vertical denial, which it seems – and we repeat it – that he hid from Mr. Anastasiadis, Mr. Kotzias but also from the representatives of the European Union. Apparently he only informed the British.

A diplomatic source from whom we asked for an analysis of the specific practices of the conversation between Mr. Guterres and Mevlüt Tsavousoglu, answered with a question:

Why the Secretary General, during the discussion with the Turkish Minister, did not answer that Mr. Anastasiadis, 12 hours ago, submitted proposals in writing, when Mr. Tsavousoglou insisted that no progress was made at Table 2 and that any Turkish “concessions” “In matters of security, should the retreats from Nicosia and Athens to the so-called internal issues (governance, property, equal treatment of Greek and Turkish citizens) precede?

We note that the President of the Republic of Cyprus had submitted written proposals in the context of the Secretary General. The proposals were described as unacceptable concessions – and they were unacceptable – and concerned the issues of the internal aspect (Table 2), the rotating presidency, the equal treatment of all citizens.

• The Secretary General and Mr. Tsavousoglou exchanged views on the issues under discussion in the chapter on security and guarantees. Mr. Tsavousoglou presented confidential information on a possible way to promote this issue.

Summary of the discussion:

1. The Secretary General asked what the red lines were for Turkey, taking into account the talks of the previous days.

2. Mr. Tsavousoglou stated that for Turkey the view of zero troops, zero guarantees was not a starting point (was a non-starter). From the moment they hoped to reach an agreement, Turkey showed some flexibility. He could now see some improvements in the talks he had not seen before, especially on the part of Greeks and Greek Cypriots. He could have shown more flexibility, but he could not do so for two reasons: Greek Cypriots were leaking information to the media, including the Turkish proposal delivered earlier in the week. In addition, there were no developments in the inter-community dialogue in Table 2.

3. As an additional constructive contribution, Turkey could provide a non paper. This contained very sensitive elements, some of which corresponded to Mr Eide’s terminology. And there could be some additional steps that were not presented in the document. Mr Eide noted that the sensitivity was understandable.

4. Mr. Tsavousoglou stated that the Guarantee Treaty is a taboo subject between Turks and Turkish Cypriots. The Turkish Cypriots had vital security concerns. That is why it was extremely difficult for Turkey to change its position on the issue. Nevertheless, he had shown flexibility. Turkey had shown a positive attitude towards resolving the Cyprus problem for a long time. In relation to non paper, he believed that the United Nations would keep it confidential. Any leak would ruin everything.

5. What Turkey could accept is the NAME of the Guarantee Treaty into an Implementing Treaty. With four parties. At the initial stage the Treaty WOULD INCLUDE the right of unilateral action, if joint action by all parties (to address acts of concern) would not be possible.

If the political and economic aspects of the solution prove successful, there could be a review at a commonly accepted date.

The Turkish Cypriots indicated that this could happen to them after three rounds of elections for the presidency and parliament. However, if the solution was implemented successfully, the review could be done earlier. 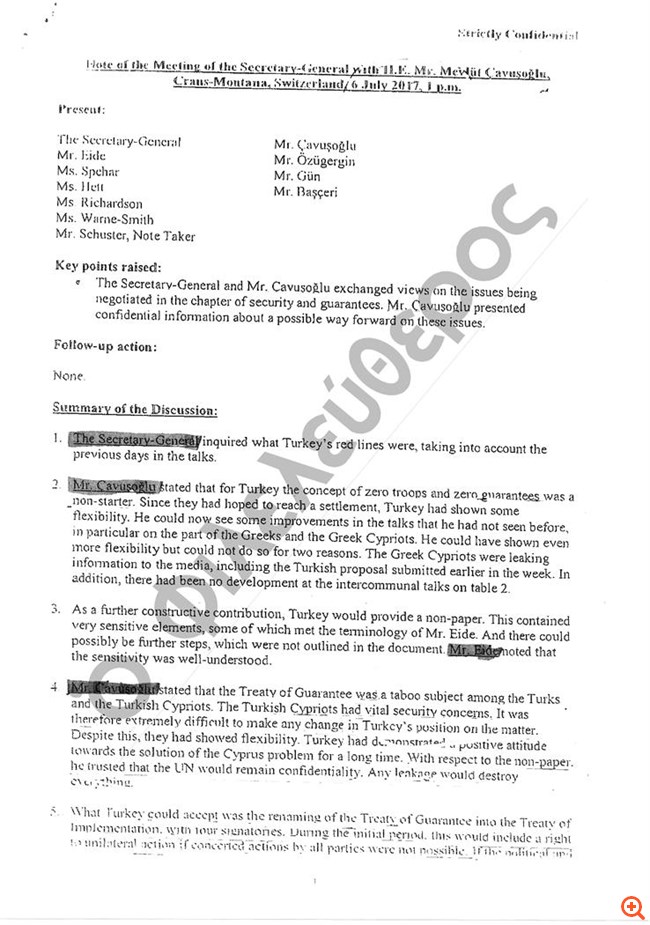 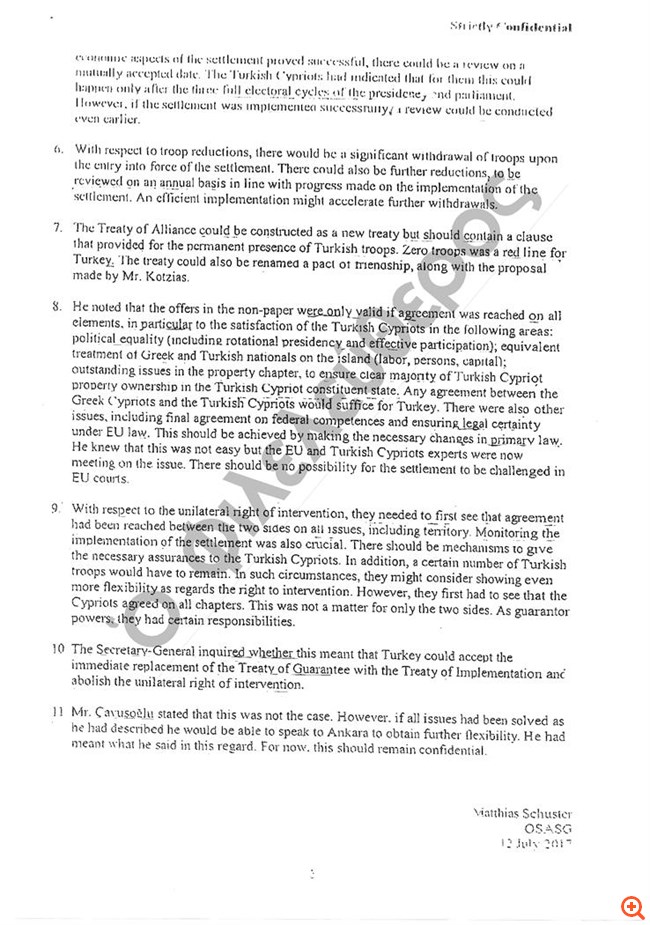 7. The Alliance Treaty could be structured as a new Treaty, but should include provision for the permanent presence of Turkish troops. Zero troops were a red line for Turkey. The Treaty can be renamed the Treaty of Friendship, according to the proposal made by Mr. Kotzias.

8. He noted that what the non paper offers will be valid only if a solution is reached on all aspects, and in particular to the satisfaction of the Turkish Cypriot side in the following aspects:

– Equal treatment of Greek and Turkish nationals on the island (workers, persons, capital).

– Pending issues in the capital chapter, to ensure the clear majority ownership of the Turkish Cypriots in the Turkish Cypriot component state. Any agreement between Greek Cypriots and Turkish Cypriots would be enough for Turkey. But there are other issues, including that of the final agreement on federal powers and legal safeguards under EU law. This should be achieved by making the necessary changes to primary law. He knew this was not easy, but the EU and Turkish Cypriot experts are currently meeting on the issue. There should be no possibility of challenging the solution in European Courts.

9. With regard to the unilateral right of intervention, they first needed to see that a solution had been reached in all aspects, including the territorial aspect. Monitoring the implementation of the solution is also critical. There should be a mechanism here that gives the necessary guarantees to the Turkish Cypriots. In addition, a certain number of Turkish troops should remain. In such circumstances they may think of showing more flexibility than the right to intervene. However, they should first see that the Cypriots agreed on all the chapters. This is not just a matter for both sides. As guarantors, they had specific responsibilities.

10. The Secretary-General asked whether this meant that Turkey could accept the immediate replacement of the Guarantee Treaty with the Implementing Treaty and abolish the unilateral right of intervention.

However, if all issues were resolved as he described, he could speak to Ankara to ensure more flexibility. He meant what he said about it. For the time being, this should remain confidential.

Where do chefs eat? With Simone Brunelli, from Maremonti, in São Paulo

Olaf Solz: The future chancellor is in favor of compulsory vaccination

The Christmas present we needed: Channing Tatum confirms that he will be in…

Derek Black Nov 30, 2021 0
Could it be that we have been good this year? Channing Tatum and director Steven Soderbergh will reunite once…

Nov 30, 2021
The heirs of Italian luxury brand Gucci issued a note with harsh criticism of the film "Casa Gucci", directed by…

Malala continues to thrive, having just graduated from Oxford…

Nov 30, 2021
Nine years ago, Malala Yousafzai was attacked in her native Pakistan for opposing the Taliban's restrictions on…

The writer Elena Ferrante launches a new book; what makes it so…

Nov 30, 2021
The population of South Africa received with “frustration” the information that there would be new restrictions…
Prev Next 1 of 6,374
More Stories

Russian Foreign Minister: US surrounds us with military…